You are in a modal window. Press the escape key to exit.

The official live mascot of Fresno State, spreading smiles and Bulldog Spirit all over the Valley!

Student Body President Warren Moody adopted a tough-looking Bulldog who showed up on campus every day, hoping to share lunch with the students. The Fresno Morning Republican started referring to the college as “The Bulldogs” in November 1921.

The first official university mascot arrived to Fresno from Alameda. The all white english Bulldog, Touchdown, originally lived at a campus fraternity house. After chewing up one too many featherbeds, Touchdown was moved to the home of Frances and Arthur Safstrom. The couple went on to own five Fresno State mascots over the next thirty-five years!
Starting with Moose I proudly chewing apart the ribbon at the grand opening of the Kennel Bookstore, the Safstroms held a loving home for Moose II, Moose III, and Moose IV. As the country entered tumultuous times in the late 1960’s to early 1970’s, the Live Mascot program fell to the wayside.
Football coaching legend Jim Sweeny’s bulldog, Halftime, became an unofficial mascot for the team, stealing the hearts of the Red Wave.
A contest was held to find the next live mascot and reinvigorate the program. Out of 90 contestants, a bulldog named Norman became the first Victor E. Bulldog! "From the first day Victor E. became our mascot, he won the hearts of all," Senior Associate Athletics Director Paul Ladwig said. "There was never a day he did not come to an event and take over and represent Fresno State with class and true Bulldog flavor." Victor E. Bulldog passed away on Aug. 10, 2012.
Victor E. Bulldog II enjoyed the roar of the Red Wave as he was introduced at Bulldog Stadium on Sept. 15, 2012. He regularly attended football games and made appearances during halftime, spurring excitement from his adoring fans. As an ambassador of Bulldog Spirit, our furry friend expanded the reach of the Live Mascot Program by visiting important university events and on-campus celebrations. Victor E. Bulldog II passed away on March 12, 2015.

Victor E. Bulldog IV has been working hard with his trainer to get ready to assume a full schedule as acting mascot. In the meantime, the mascot duo will share live mascot duties as training progresses. Ultimately, Victor E. Bulldog IV will take over in Spring 2023.
Victor E. Bulldog lives in a loving family home with an employee of Fresno State. He lives a balanced life, enjoying playtime with siblings when he’s off the clock.

Victor E. Bulldog loves making new friends and spreading Bulldog Spirit throughout the valley. Whether he's visiting students on campus or Fresno State fans in the community, Victor E. is sure to add excitement to any occasion. On campus visits can be anything from team meetings to large scale special events. Want Victor E. to make an appearance off campus at your fundraiser or private party?  You're in luck - he's quite the party animal. Please read our guidelines below to keep our mascot happy and healthy!

General Guidelines
The Fresno State Alumni Association oversees all requests for appearances. A request for an appearance does not guarantee the request will be able to be granted. Once submitted, an employee will contact you for additional information, if needed. Requests for appearances must be submitted at least two weeks prior to the date of your event.

What will qualify for an appearance?
Victor E. Bulldog makes appearances on campus and in the community that enrich the Fresno State experience and help further the University's mission. He is most likely to attend events requested by:

How much does an appearance cost?
We work hard to keep on campus appearances free of charge, making Victor E. as accessible as possible to our campus community.
Fees for all other appearances start at $150 for visits lasting up to one hour. Additional fees for fuel and staff time also apply. These fees aid in covering expenses related to travel and other needs of the Live Mascot program. With questions and special requests, please contact Live Mascot Program Coordinator Gina De Young Zante at (559) 278-4676 or via email at gdeyoung@mail.fresnostate.edu.

Together, we’re helping to enrich key student experiences and spread smiles with meaningful community engagement. Those appearances at sporting events and student initiatives help to connect our community to Fresno State in a fun, interactive way. Although Victor E. is an ambassador for Fresno State, he's completely reliant on donations from fans and friends like you!

Make a Gift to the Victor E. Bulldog Fund

No! Victor E. Bulldog III does not receive financial support from tuition dollars. The Live Mascot Program is fully dependent on donations from fans and friends like you. 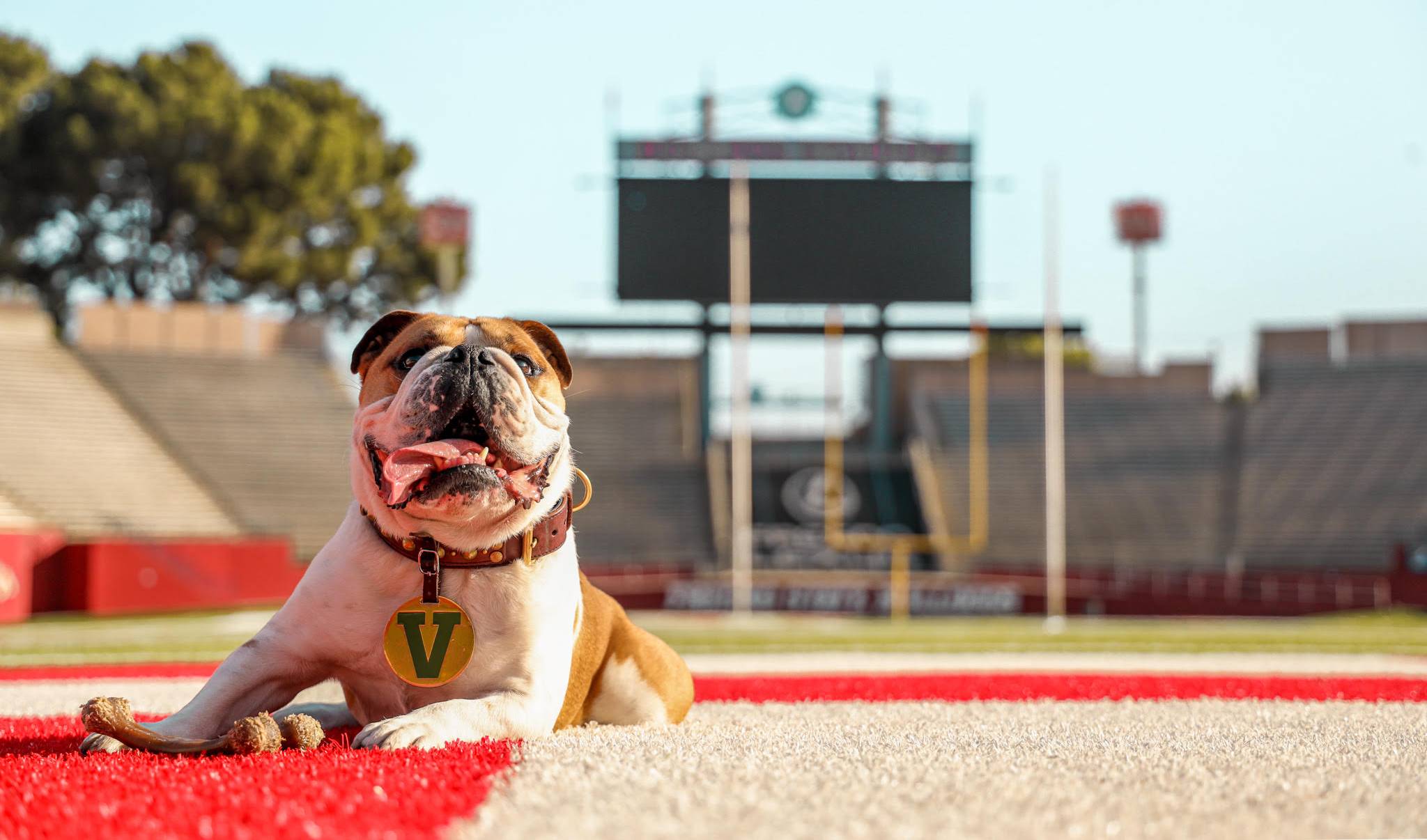 Victor E. Bulldog loves making new friends and spreading Bulldog Spirit throughout the Valley. Whether he's visiting students on campus or Fresno State fans in the community, Victor E. is sure to add excitement to any occasion. (See terms and conditions under the FAQ)